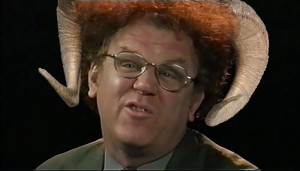 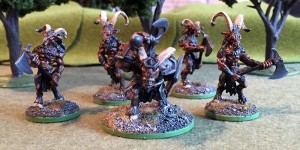 Here’s my first run at how I’m going to treat armour and such:

I’ll be granting players the option of giving their characters either the rules-as-written version of Constitution bonuses/penalties or this version by Glenn Rahman, from Dragon 31 (no back and forth though; you’re either an ox or an ocelot: choose): 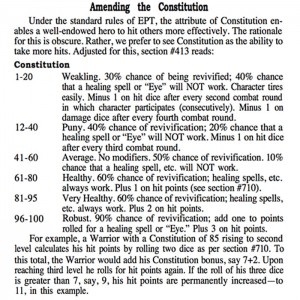 And I’m going to be allowing the Adventurer class from The Excellent Travelling Volume #2.

If you’re gonna have one … … you gotta have the other. I’m adapting a Level Advancement campaign system for Otherworld Skirmish from the 7TV Summer Special‘s Ratings War chapter.
It’s actually pretty straight forward and the Otherworld rules as they already stand allow for a few ways to approach it.

One can start with a traditional adventuring party faction of already-classed 1st Level human and demi-human D&D characters, or one can create a DCC-style 0-Level funnel faction.

For the former I do the following:

Here’s that Apprentice I mentioned: One could also play a Monsters! Monsters! faction of all evil Humanoids. Use these as your guides:

Hell, one could go all out and play a full-on Monsters! Monsters! faction including any evil creatures of 25 GP or less, no upgrades, 100 GP max.

From then on advancement of characters/models happens pretty much exactly as it does in Ratings War. Just read that chapter in Summer Special, swapping these words as you go:

A note about Mules, Dogs and Mounts:
I see no reason to not allow Level advancement (XP upgrades) for them. See these three excellent articles (the first two for Labyrinth Lord and the third for GURPS) for inspiration on heroic animal companions. Then go for it!:
Mules
Dogs
Horses

First edition Chivalry & Sorcery — if you can find a copy — also contains some good heroic horse rules.
And finally, FGU’s Wild West has some rules for creating horses akin to supporting characters.

These concepts can easily be generalized to other mounts (like Dire Wolves for Goblins, or camels from 7th Voyage) or other “pets” (like, say, apes, lions or bears). Mounts could include bears, giant goats, terror birds, smilodons (populators are my favourite), podogs, or cold ones.

After reading the above sources I decided animals can advance in the following ways:

Keep track of how many Fate tokens each faction spends throughout the encounter. At the end of the encounter, each spent Fate token = +1/2 VP (round down).

Re: Special Powers: a character may take a Legend or Companion special power for 10 XP. This adds 5 GP to the cost of the model. A character may only ever have one special power. [They all work except the Immortal Fiend’s Eternal Spite; that power doesn’t have legs, to my way of thinking.] 7th Voyage star qualities could also serve, especially Destiny and Free Spirit.

Re: Upgrades in general: every model in your faction can be given one upgrade after each encounter. Rules like no-Trained-weapons-unless-Martial-Training and Set-Traps-before-Gotcha! apply.

Re: Upgrades in general: upgrades should try to reflect the encounter that just ended. E.g., selecting a new attack of Javelin 6+ after fighting some Gnolls or gaining the Light Armour ability after defeating a band of Dwarves.

Re: Adding new members: any model that can ride may purchase a Mount. This does not count as an upgrade to that model.

Re: Henchmen: this campaign Level progression system doesn’t use the Henchman rule for factions.

Re: Dismounting: any mounted character can dismount. If the Mount has not been given any upgrades it remains stationary and unresponsive after dismounting, though it can be attacked and will defend itself or run off as actions dictate. If the Mount has been upgraded even once it can be moved and controlled like any other member of your faction. Just went to Rx Comics and picked up last month’s issue (#6) of Zombies vs Robots.

No relation to Reaper’s Bones 3. I’m pretty sure anyway.