Here’s that Book Golem I mentioned a while back, plus a Swarm of Books.

Book Golem and Swarm of Books

I’m sure I’ve seen a fig of a Swarm of Books out there somewhere but can’t remember where. It might have been a one-off mod. I can even picture the photo, but hell if I can find it now.

[This one’s for Darren.]

A number of years ago I found this fig online. And immediately bought one. 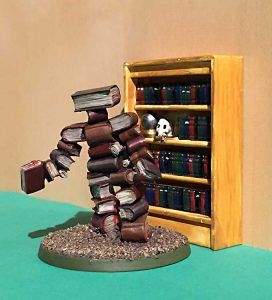 You can find him over at Black Cat Bases. (The bookcase is old HeroClix, from their Indoor Adventure Kit.)

After some play he went to languish in the back of my cabinet for, well, years.

Then about two weeks ago “Book Golem” was mentioned a couple times in the Bones V comments section. I gather it was suggested as a wanted future Bones Black mini.

Then this past weekend I was up at Strategies Games and saw the new Dungeon Crawl Annual. I bought it immediately too. While still poring over it in the store I came across these two illos: 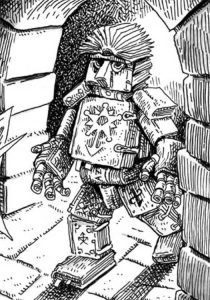 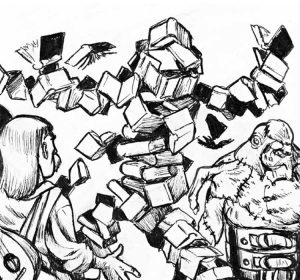 I decided to do a bit of digging into the history of this guy. I know, I know. You’re very happy that I did. You’re welcome.

Turns out Black Cat were the first ones I’ve been able to find making such a thing. It gets a mention in a thread on The Miniatures Page from May 2009. (And there’s a nicely painted one — from 2012 — over on Anatoli’s Game Room.)

Then in June 2009, the Ghostbusters video games included one as a loud-talker in a library you have to zap.

And finally in 2016 it gets stats in the Aventyr Bestiary (see page 43). There’s also this nice illo of one on DriveThru, though I don’t know the date of it.

When I build one for a game I like to put at least one magic book in it. I use six main hit locations (head, torso, left and right arms, left and right legs) so sometimes I roll a d6 for how many tomes to shove in.

The Encyclopedia Magica has a great index for all that four-volume collection’s books, librams, manuals, spellbooks and tomes (goto page 1573).

Once the books are assigned to their hit locations I spend a few minutes thinking about how they’ll affect the performance of the golem (hit points, armour class, move, strengths, weaknesses, etc.). Then we fight!

If you want to go with less magic in your stacks, you can make up for it by naming some of the mundane books assembled in the lumbering pile. Two good sources for such are The Dungeon Alphabet (see page 9) and Fishwife’s 100 Oddities for a Wizard’s Library; both include some really good ideas.

I’ll post stats for one of my Book Golems in the next few days.

I just watched Secrets of Blackmoor:

Those guys remind me of when I first joined Trumpeter as a kid all those decades ago.

I hope they do make Part 2.

The interwebs made me do this: 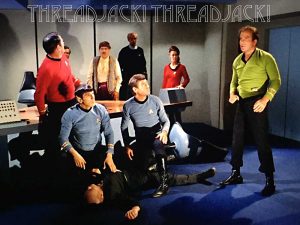 Well it’s the 5th of Moldvember again. So here’s to you Major Tom!

And while I haven’t written him up I am finally reading the Niall of the Far Travels stories by Gardner F. Fox so I can add him to my Giants in the Earth roster.