My “final” Schools of Magic for spells-without-level Lamentations. This is it. I “promise.”

This spell list comes from Dungeon Crawl Classics. One great thing about spells in DCC is their built-in success and Misfire tables, one per spell. You can just go with them as is and for successes — as a short hand — use the effect listed for rolling a 20. Twenty plus Intelligence bonus allows smarter Wizards to get a bit more oomph out of their spells. Or since all DCC spells have eight levels of success, you can roll a d8 and go with the result. This could make the effects of spells pretty swingy though, so you’ll have to give it some thought, based on the kind of game you’re after. Personally I prefer 20 + Int bonus; it keeps the range of effects fairly narrow and makes a Wizard’s Intelligence directly relevant to spell casting. 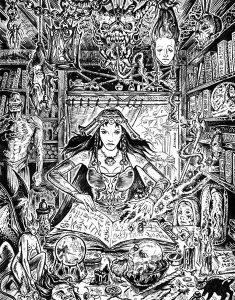 And Miscasts are easily handled by rolling a die on the spell’s Misfire table. Boccob’s yer uncle!

And here’s a School of magic I recently stumbled across on DriveThruRPG: 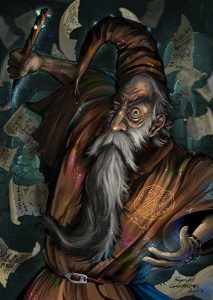 [Credit where due: I found the illo above HERE. Nice work there.]

Roll a d7 to determine which Circle of Madness was your alma mater:

*: Child Mob reminds of How Many Five Year-olds Could You Beat in a Fight? So good.

A number of these spells are pretty cool; I suspect Joeskithedungeonbrawler [Praise Crom, he’s BACK!] was at least a contributing editor. Your opinion of him will probably colour your reaction to the seven volumes (so far?) of Magic Madness.

Finally, here are a few pointers to using all these Schools of Magic in spells-without-level Lamentations:

One spell can be memorized per level (per Vaginas are Magic).

A wizard starts with three spells (plus or minus Intelligence bonus; minimum one, maximum six) copied from his School’s precious tomes.

A wizard can choose either his School of Magic or his starting spells, but not both.

If he decides to choose his spells there are two caveats:

When rolling for School of Magic, roll 1d12 and a second d12 as a check die. If both dice are doubles of either 1 or 12, the “Wizard” is in fact a Sorcerer a la Wonder & Wickedness (12/XIV). If not, see the list below for the result of the main die: 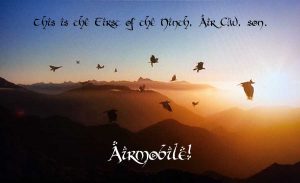 Another School of Magic for spells-without-level Lamentations.

This lists the Magic-User spells recorded within the final First Age tome written by Mordenkainen. 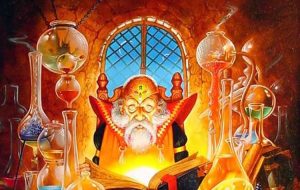 Here are some semi-generic miscast tables by type of magic for use with spells-without-level Lamentations. They’re adapted from a list posted to the Lamentations forum by Andomedanaea.

These are immediately usable with Illusio Primo, White Dwarf’s Treasure Chest and Unearthed Arcana (as those Schools are drawn from First Age material). With a little thought they could be used with any spell from any School.

When a wizard miscasts, look at what type of magic the spell involves and roll on the appropriate table: 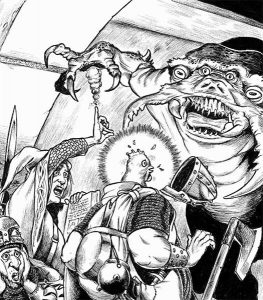 You could also press Dungeon Crawl Classics into service here. The tables for Mercurial Magic, Corruption and Spell Misfires (DCC/111-120, in my  4th print) are pretty great.

Here’s another School of Magic for spells-without-level Lamentations. 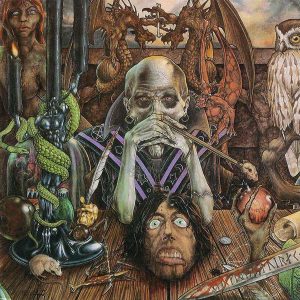 This school is named after the source of its secrets, a box of sheafs and scrolls stolen from the White Dwarf of the Isles. Some say he wants them back; others call bollocks to that.

When determining a 1st Level Wizard’s initial spells, treat results of additional levels – whether higher or lower – of The Hellwalk Spell as duplicate rolls; increase or decrease (50/50; 65 rolls around to 1, and vice versa) by one until you land on a spell not yet known.

In case you want to use this list (with its 10th level spell) [and The Necromican (which contains numerous spells up to 12th level!)] in a conventional spells-per-level manner, here’s an extension of the Magic-User table for Lamentations: 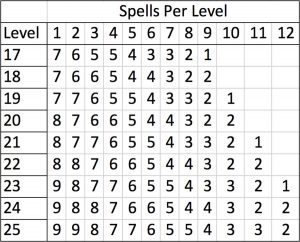 Also, adhering to the method and manner of one’s School of magic has its benefits; researching familiar spells – ones you’ve seen cast or ones you know about but just don’t yet understand – takes less time and incurs less cost. Use this modified spell research table (per the one on page 82 of Rules and Magic) for such work:

You can find, I’m pretty sure all, the spells on the list HERE.

[Note: I’ve got a couple more Schools to post. Once I’ve done that I’ll put up a full list of Schools with some ideas on how to use them.]

In case you’ve never done it, you owe it to yourself to watch Zulu Dawn and Zulu back-to-back.

That’s four and a quarter hours of “Stand-to!” “Usuthu!”