OldGamersWorkshop has a second group of mutants — and some eeeevil humans — on Kickstarter. 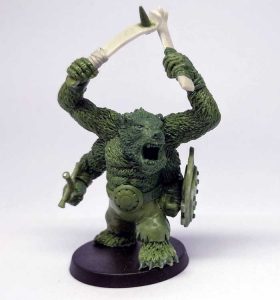 You can get the figs from their first project as well.

You should go do that.

You know how Traveller‘s chargen is a mini-game you play before the real adventure starts?

Well I’ve been thinking about this: 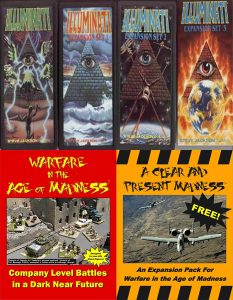 To keep my tinkering and tests simple I think I’ll leave out all of both games’ expansions for now. I’ll stick to just the first Illuminati* pocket box cards and just the original Warfare in the Age of Madness (WAM) rules.

You start a game of Illuminati but only play long enough for each of the conspiracies to get their hooks into, say, 7-11 groups. Then the Madness strikes.

Your Illuminati group cards become your other WAM force elements.

I’m still working out how to translate Illuminati groups’ Alignments, Power, Resistance, Incomes and Special Abilities into WAM elements’ Perks, Penalties and Traits. These are just some first thoughts.

There are also the Illuminati Special Event Cards a player might be holding when the Madness ensues. That’s more to think about. For now I’ll set them aside too, and focus on the conspiracies and groups.

Just imagine it though! Who doesn’t want to see the Gnomes of Zurich’s I.R.S. get hammer-and-anvilled between the Bermuda Triangle’s Cattle Mutilators and Punk Rockers?

To save time you could just deal each WAM opponent a random Illuminati conspiracy card and a dozen random group cards. [If you do want to play Platoon or Company Plus force levels, deal six or 18 groups respectively.]

Playing even a quick pre-game of Illuminati will make the whole thing take longer than simply dealing cards, since you’ll still have to translate your organization into a WAM force before you can start pushing lead.

Another big advantage of dealing cards is it can be done in advance. It could be done over a beer or during a brief meet-up at your local game shop. Deal — but don’t reveal — your cards, take them home and build your forces in secret. Then, WhAM!

And I guess this is a good time to mention I’m also planning to scale it up to 28mm since my whole collection is that size. In the same way Inq28 simply halved moves and distances from 54mm Inquisitor, I think just doubling WAM bounds and ranges (and increasing board size) will work fine for Illuminati WhAM!

Ordinarily I really, really prefer my figs single based but for this game I think grouping minis together on my Warbases Dux Brit movement trays will work fine, especially given how elements function in WAM.

All of the above said, if all you want to do is humour-up an otherwise straight game of WAM, you can just deal each player one Illuminati conspiracy card for their Command element and a group card for each of their other force elements. Assign your cards to your elements however you want. Then have at it!

You’ll still be able to order your Feminists to assault the enemy Post Office. 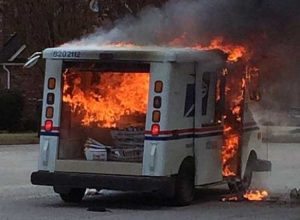 And I guess if you want to get all themey, you can just pick an Illuminati Alignment or two and take the cards you want. I’d try to go for forces made up of compatible Alignments like Weird Government on one side versus Violent Liberal on the other. If you do this remember that, while any Alignment can associate with Criminals, no organization can include more than one Fanatic group because they all hate each other.

[*: I’m going with the ’82 first edition because I appreciate the classics. As a bonus the cards are smaller, simpler and easy to read from a distance. Also, I want to minimize the cards’ visual impact on the table so as not to distract from the figs and terrain.]

[**: The opening of Warfare in the Age of Madness always make me think of the start of Twilight: 2000.]

[EDIT: If you want to go nuts, there are at least two other generations of Illuminati in the wild, with a couple more conspiracies and way more groups than the original game. The cards are bigger and all are illustrated. I may end up there myself eventually.]

On this Sunday I thought I’d mention some figs I just came across this past week.

I am thankful they exist, and you’ll be too.

First, the explorer who made me realize the world needs more chicks with picks. I give you Miss Abigail Halsey: 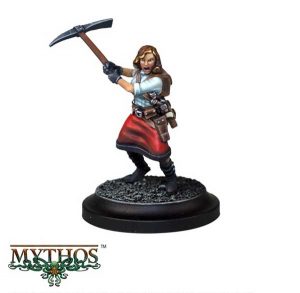 You can learn about her on the Mythos the Game site. And you can buy her and her Priory cohorts on the Wayland Games site.

I picture this gal exploring a sand, dirt and rock tunnel. Then there’s that scene where the tunnel ends at a door of strangely marked impossible metal that shouldn’t be where it is. Obviously she’s not going to let it stop her. She gets the thing open. There’s that hiss of air, that wisp of swirling knee-deep fog pouring out. She pans her light around and spots these: 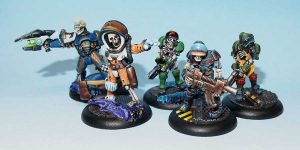 You can — and should — buy them on the Diehard Miniatures site.

I saw these two vids today, both for the first time, and both within a few hours of each other.

Music-wise, what are the freaking odds? 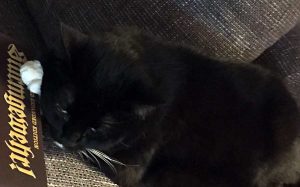 I’ve enabled comments on my Blog and Blather pages.

With the death of first Google Plus and then Yahoo Groups I decided to help fill the gap left by them in what small way I can. So here we are.

But I want to be a doorman, not a bouncer. When you sign on you’ll be asked who you are somewhere else and I’ll go look you up. If you’re conversational and constructive, you’re in. It’s that easy.

If I already know you, your email or your handle elsewhere just give me the minimum and I’ll hook you up.

Caveat: Comments will be possible on new posts for two weeks only.

All posts I made before today though, will be open for a month before they close again. That’ll give you more time to chime in on any of my older stuff should you wish to.

I hope to hear from you soon! 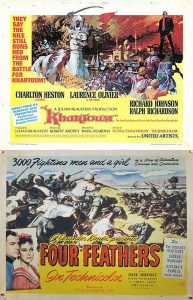 While not quite as perfect a back-to-back double bill as the Zulu flicks, Khartoum and The Four Feathers are still chocolate and peanut butter.

At almost four and-a-half hours, if you start early they’ll carry you through to lunch! If you get up late I guess you can watch the first movie then break for a bite; afterward the second film will take you through to tea.

If in the evening you want to play them out, I recommend either Howard Whitehouse’s Science vs Pluck or Bjorn Reichel and Christian Steimel’s Triumph & Tragedy Colonial Supplement. Daniel Mersey’s The Men Who Would Be Kings is another fun game.

And goto Major General Tremorden Reddering’s Colonial-era Wargames Page. Trust me. [Here’s another link. I don’t know which is better.]

DOOM ON THE WARDEN, for Metamorphosis Alpha 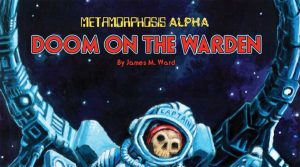 You’ve only got a few days left to get in on the adventure. So what are you waiting for?

They’re making two new colour bands for this (scroll down; bottom of The Stretch Goals; right before Add-Ons): Bioscience is one; the other is Military Command.

And get this, while chatting in the comments I learned that the Command Band I received when I backed the deluxe hardcover Kickstarter a few years ago is one of only four. I had no idea! Check it out: 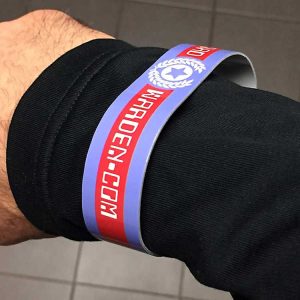 [Edit: Turns out there are at least SEVEN Command Bands. Still. Pretty cool.]

THESE GUYS GET IT

I was recently flipping through the Fifth Age DMG and came across this [on pages 56-7]:

They’re talking about the Plane of Water. But it’s pretty simple to switch that for Space and replace “Isle of Dread” with Starship Warden.

If you think of the original disastrous “cloud of space radiation” as also being a temporal anomaly, a wormhole and a warp storm the “sky’s” the limit. She’s a dimension-drifting, plane-plying, time-tripping Great Space Coaster. Anything and everything can — and has — happened to the Warden. She’s been everywhere, seen it all.

You want a Chronosaur time team? Done! Alien Legion recce patrol? No problem. Terminators vs Terminators? Go for it! Were Justifiers secreted inside? I say yes. Have Zhodani Commandos ‘ported aboard? Affirmative. Are Greys mutilating cattle and probing primitives? At this point, do you really have to ask?

I keep the radiation cloud as the original incident. Then I mix things together like Swamp Water. Seeds here, nuggets there; encounters nearby, quests decks away. It doesn’t always work:

But that’s a risk I’m willing to take.