This anime from Short Peace:

Could be a chapter from this comic:

They’re both very good and have a similar vibe.

I present to you Huckabear the Paladin and Hodge, his faithful manservant.

They’re statted for Lamentations below and for Song of Blades further down. Huckabear (as created and described on Blog of Holding) is a powerhouse and paragon. I made him a Paladin in my campaign by adapting the article at Knockspell 1, pg 18 and this thread on the Lamentations forum.

Here’s how they look on my shelf: 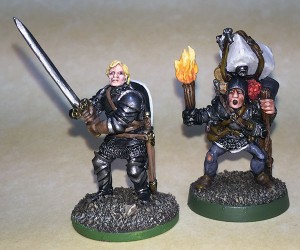 The figs are Reaper and Citadel.

And here they are for Song of Blades and Heroes 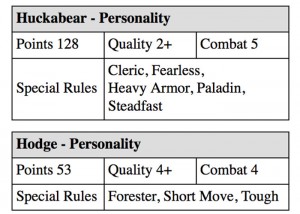 Here are my beloved Tiefling triplets:

All are Reaper Bones figs. You can find them here, here and here.

The Sibs in Lamentations of the Flame Princess

All have 60’ darkvision, can create Darkness 15’ Radius* once per day, suffer half damage from cold, and are +2 on saves versus fire, electricity and poison. All get +1 to CHA and INT, -1 to STR and WIS. [Adapted from Planescape Monstrous Compendium Appendix (1994), pg 112.]

I rolled their ability scores using the Dicenomicon, my goto for not-dice.

HOT FEET
Magic-User Level 1
Duration: 1 Round/level
Range: 10’/level
This spell causes the feet of the target to grow searing hot. The victim must hop quickly from foot to foot or suffer painful burns; this action makes normal movement impossible. While hopping, any bonuses due to DEX are negated and attacks by the sufferer are at a -2 penalty to hit. Spells may not be cast while hopping due to the exertions and contortions involved. Failure to hop will inflict 1d3 damage per round.
[I can’t remember from what source I adapted this.]

LESSER FIRE ORB
Magic-User Level 1
Duration: Instantaneous
Range: 10’/level
A flaming orb 2 inches across shoots from the wizard’s palm, dealing a 1d8 fire damage. A successful to hit roll is required. For every two levels past 1st, another orb may be launched, to a maximum of five; roll to hit separately for each orb.
[Adapted from Tome and Blood (2001), pg 93.]

BLAZING SHIELD
Magic-User Level 2
Duration: 1 Turn
Range: 0
A disc of flame and force takes shape upon the wizard’s arm. The Blazing Shield grants AC 20 against missiles and AC 18 versus melee strikes. The shield’s force also blocks incorporeal undead’s touch attacks. Natural attacks (i.e., claws, teeth, &c.) against the shield suffer 1d6 damage per strike (save negates). Any attacks which do hit cause two less points of damage than they normally would.
[Adapted from Relics & Rituals (2000), pg 53.]

COMBUST
Magic-User Level 2
Duration: Instantaneous
Range: Touch
The spell makes a combustible object or a creature’s combustible equipment burst into flame, even if damp. If the target is a creature’s gear the initial eruption causes 2d6 damage +1 point per caster level (maximum +6) with no saving throw. Further, the creature must then make a saving throw or continue to burn per the Oil and Fire rules on page 60 of R&M. If the target is an object it takes damage as indicated then automatically continues to burn per R&M. If the object is held by a creature, fire damage as indicated is caused but a save halves it.
[Adapted from Magic of Faerûn (2001), pg 85.]

*: DARKNESS 15’ RADIUS
Magic-User Level 2
Duration: 1 Turn
Range: 10’/level
The spell creates total impenetrable darkness in it’s area of effect. Darkvision is useless. Neither normal nor magical light will work except for Light or Continual Light spells. This spell and a Light spell will negate and counter one another.
[Adapted from Players Handbook (1978), pg 69.]

And here they are for Song of Blades and Heroes 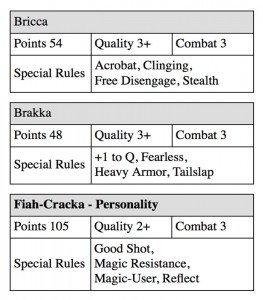 The Special Rules show the four Level advances I gave each fig (per my Song of 3d6-in-Order). Brakka’s Quality was improved from 4+ to 3+ with the listed +1 to Q.

Both Lamentations and Song of Blades being magic item-light games I decided against giving them any.

The Con Game I Never Forgot

When I was twelve or so I attended Trumpeter‘s annual Salute gaming convention. That year it was held downtown in conference rooms at Robson Square near the Law Courts. And I played in one of the most enjoyable games I’ve ever encountered.

I remember the good guys had a Paladin, a Ranger and a Magic-User among others. I played a Cleric. The bad guys included a half-orc Assassin, a Wyvern and a mid-sized Red Dragon, plus other cruel bastards. There was something like fourteen players. It was fun watching some of the guys flipping through their Players Handbooks for stuff while across the table others were paging through the Monster Manual for their info.

The table was a good six-by-nine feet of woods over gentle slopes. Our objective was to find a cave and get a team inside to secure something against the forces of darkness. But that never happened because the two groups ended up in a running battle through the trees and hills. That half-orc Assassin hopped on the Wyvern and they rained blue murder on our guys. At one point every clearing had a fight going on in it. Like ‘Nam but with Dragons instead of Cobras!

That’s where I fell in love with Flame Strike, still one of my favourite Cleric spells. It’s a bit of this and a bit of this:

As you can tell from the foregoing I’m a big fan of rival-party abattoirs. I’m an equally big fan of the 4th-to-7th range band of Levels in D&D, capable but still hungry. And I’m also a large fan of the skirmish minis game Song of Blades and Heroes.

I go through two steps to create D&D groups for PvP games of Song of Blades.

A. From Dwellers of the Forbidden City:

B. From Expedition to the Barrier Peaks and The Lost Caverns of Tsojcanth via a thread on Dragonsfoot:

The D&D classic The Rogues Gallery (see here, here and here) is great for banging out parties like this.

Second, I translate those characters through my patented Song of 3d6-in-Order converter:

If I’m going to include, hm I don’t know, say a Lammasu or Manticore, oh, speaking of which, Bang!:

Ahem, as I was saying, if I’m going to include a creature or monster in the game I first see if I can find one already statted for Song of Blades. If I like what I see I use it. If I don’t like the as-is version I put on my character goggles and treat D&D Hit Dice as Levels; then I run the critter through Song of 3d6-in-Order.

Then I found this in White Dwarf 17: 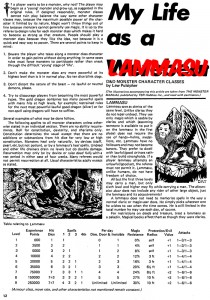 And Mr. Sholtis kicked the field goal with YEAH, but THIS Manticore …