My congratulations to Messrs. Abnett and Eaglesham on this fine piece of work: 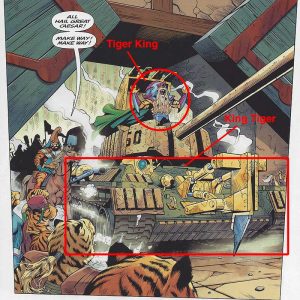 It can be found in issue 1 of DC’s Kamandi Challenge ’17. 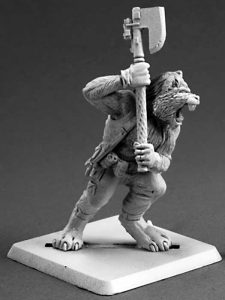 “You knights will accompany me. …” 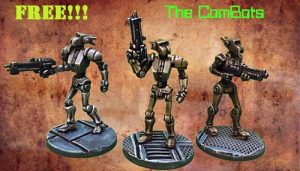 “… I shall CRUSH the barbarian without mercy!” 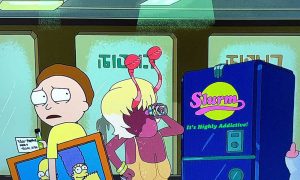 I want this to be a thing: 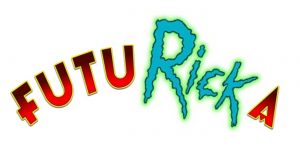 Ideally during the third season of Rick and Morty.

[Edit: Upon further consideration, I realized it’s appropriate to give the show still running its due. So let’s call the crossover ep …

Soon to be menacing enemies and friends alike in a quadrant near you:

This trio of Pigstronauts is being sculpted by the incredibly talented Mr. Paul Muller.

I wanted to play some straight SNAPSHOT scaled up to 25-32mm so I tracked down this pic of the counter sheet from the original game: 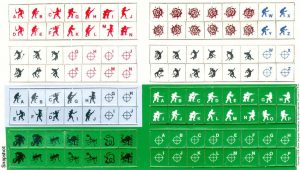 You can find it here on Grognardia.

Since I replace the Character counters with (mostly) 28mm figs in my games I was really only after the Targeting and Explosion tokens.

With his go-ahead I scaled up that image 200-ish per cent and quartered it so I can print and cut them out.

[Edit: You can buy the complete game here.]

I found pics of the two sides of the SNAPSHOT Chart.

I also found the errata for the Chart.

So I jacked the resolution of the images, corrected the tables with the errata and fixed a string of typos.

[Edit: You’re going to want a ruler to read the chart.]

I just got these: 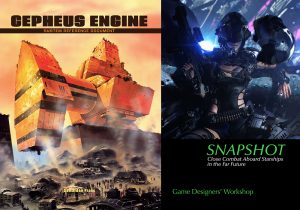 Here’s an example of where I’m going: Skills in ÇNAPSHOT

But, since I’m an exclusively 25-32mm guy I needed an appropriately scaled deck plan to play on. So I got these from Far Future Enterprises.

After cropping them and cleaning off the excess info I ran up the hill to my guy and had them printed at 200%. 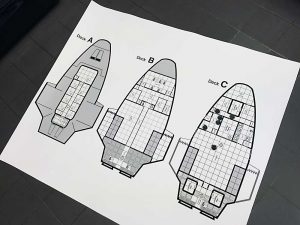 Now we can all see what happens, When Space Ninjas Attack!

Both the 100-ton Scout/Courier and the 200-ton Free Trader scale up just right.

Here’s a great overview of SNAPSHOT on BoardGameGeek.

Turns out I was fairly clever. Just forty years late.

So, I had this idea about a week ago: Hey, what if there was a vampiric van? Like, a, Vanpire. Yeah! Right? 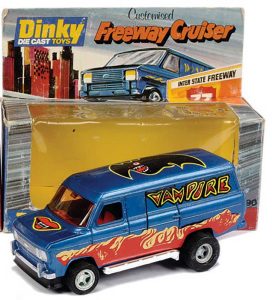 And in case you wanted to build your own 1/24 scale bloodmobile:

That’s a veritable nest of Vanpires! 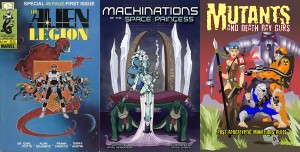 OK, much as I love Mutants and Death Ray Guns it does lack a few things I really want. So over the past while I’ve been working on a number of expansions and mods for MDRG.

And now I’ve decided it’s high time I put them all in one place so I can find them when I need them.

The image above is one of the major reasons I’ve done all this. Aliens.

Mutants and aliens go together like chicken and waffles. You know, spAce-poc; like if Heavy Metal was a wargame:

Anyway, Alien Legion has always been one of my favourite comics; it’s been percolating in the back of my mind for years, decades actually. Then I got into MDRG. And then I discovered Machinations of the Space Princess.

Machinations is a great rpg in its own right. But what I especially like about it is its excellent list of playable alien types and their typical characteristics. (And it turns out the alien list in Machinations is nearly identical to this list on Wikipedia.)

The Machinations alien list is not unlike the list of Mutated Animal types playable in MDRG. So I mashed those two ideas together. Nuts and gum, together at last!

I will appreciate any advice on my alien list, especially from people who know both Machinations and MDRG. You can reach me through this site’s Contact page.

And speaking of playing an Alien Legion party in MDRG, I strongly recommend you pick up a set or two — like I did — of C-P Models’ Alien Federation figs. They’re pretty much Alien Legion, the minis.

I also wanted to add this guy …

But unlike the magic system in Fightin’ Fungi, I wanted to take advantage of the hundreds — if not thousands — of spells out there in the wild for the various old-shool D&Ds (since I’ve already written my 3d6-in-order converter).

I wanted as many bizarre — but simply written — spells as I could get so I pulled entirely from Space-Age Sorcery, Eldritch Weirdness and Lamentations of the Flame Princess.

Finally, Tim over at the wicked-good blog The Savage AfterWorld gave me permission (thanks Tim!) to mod for MDRG — and publish here — his excellent Time-Displaced character race/class for Mutant Future.

Now I can field the occasional pulp gangster or Viking raider in rubble-space.

All introductions aside, here are my files. I hope you like them:

Increased Randomness in MDRG (Artillery is still under construction)

Metamorphosis Alpha Converter to MDRG (or as I like to call it: Heavy Metal, the roleplaying game)

[Edit: For a slightly different — and I think improved — version of my Chickens goto: this text that is a link to something awesome. That book also includes some classic alien types. And cannibals.]

[What about second edit?: I posted a link to these docs on a forum and somebody made a comment about not having a very extensive figure collection. He doesn’t use the game’s random generators because they often come up with characters for which he has no model. I gather he just uses the Warband Calculator to stat up minis from his collection on a fig-by-fig basis. I offer a meet-halfway solution:

Use the game’s — and these — random tables to generate your force. But if you generate a character-type for which you have no model, just add one to the roll until you land on a result for which you do have a mini. (Adding one to the last entry on a table wraps the result back around to the first entry.)]

Over the past month or so a trio of really cool things happened!

First, I was invited to talk with the guys on the Skirmish Supremacy podcast.

Check it out: Skirmish Supremacy

Good times! [The audio’s a bit choppy; I think that’s on me as it was my first ‘cast and my first go at Skype. So, apologies to Nick and Tim.]

Ash and Jay had a throw-down of This is Not a Test, the latest chapter in their series called Nickel-City Stories.

[Then round two came out today: Nickel’s Back]

Third, Ganesha Games — makers of Mutants and Death Ray Guns — co-created a Kickstarter called Project Simian Ultra X. It’s cool. But what’s really cool is this: Ganesha and Interloper are collaborating on the campaign book for the project! Andrea from Ganesha is writing up my figs as the rivals and enemies of their Simians.

This is gonna be great!