That’s right. Beam this up Scotty!

Been thinking about why I love these guys (scroll down, you’ll see ’em) so much: And I finally figured it out.

I’ve spent so much time (so much time) over the years (years!) pining away for a high-quality set of bona fide 28mm Traveller Zhodani commandos in combat armour (Seriously, I even emailed Far Future about licensing them.) that these figs slipped through my sensor grid. For a few hours. Then it hit me.

I guess those aren’t Laser Rifles after all; I’ll have to stat me up some PGMPs.

So, for the two or three of you on Earth, and the dozens cloaked in orbit (You know who you are.) who don’t know Reaper just launched their Bones III KS, they did. Go. Here. NOW! Bask in the rad-powered glow.

That was about an hour-and-a-half ago.

They’re so damn cool — though I’ll clip off those bayonets — I statted them for Mutants and Death Ray Guns. [The above awesome brought to you by Nextwave (top), The Simpsons (middle) and Space Riders (bottom).] The Mind Menace for Mutants and Death Ray Guns:

Now Thundarr too must learn!

The Mind Menace for The Savage Afterworld’s World of Thundarr (scroll down a bit; the download link is on the right hand side): After teleporting back from orbit — Wherever that is! — Mindok reinstalled his disembodied brain back into his hover-helm. He doesn’t bother with the purple robe anymore since the cat’s out of the bag concerning him being nothing but a glowing green brain. He’s made some modifications to the hover-helm and suped-up his tracked, submersible war machine. As soon as he recruits a new general to lead his minions in battle he’ll set about seeking revenge on Thundarr & Co. for thwarting his plans of conquest.

[N.B.: Once it comes out — later this year apparently — I’ll be rewriting Mindok for Dungeon and Mutant Crawl Classics. I’ve got big plans for my boy here. Big plans!]

the Eye of Terror? It’s a cool way to set some Rogue Trader skirmish gaming or X-plorers roleplaying in a new environment. Combining “An Alternate Beginning Sequence for Metamorphosis Alpha” (from Dragon #6) with Justifiers and X-plorers gives players another pretty damn cül option for character type: animals bioengineered to anthropomorphic intelligence. Think the wake-up scene in Aliens but with monkeys and tigers instead of Hicks and Hudson. Whereas the Clones of of the Alpha Protocol were intended to avert shipboard calamity, the animal Betas were created to be the first landers on the destination planet, the front rank whose mission was to recce and report. They were engineered, vat-grown, age-accelerated, educated and trained, then frozen in cryo-tubes and secreted away aboard the ship. Only the captains and top colonial officials and security officers knew of their existence. All Betas possess the equivalent of the mutations New Body Parts (for speech, hands and bipedalism) Taller or Shorter (as the case may be, to bring them within human stature norms) and Heightened Intelligence (for human-level cognition). Note however these are not mutations and no benefits accrue from them other than those just stated (e.g., Heightened Intelligence does not give +4 to MR). While the information below provides for the possibility of mutation, Betas are not — in and of themselves — mutants; how they are is not accidental, it is intentional.

They’re Time-Displaced Strangers in the world to which they awaken. They were honed and toned hundreds of years ago to do a job with defined parameters and ongoing logistical support. Instead their capsules open to a command and control vacuum. But they did go to sleep expecting to wake for insertion into an environment much like the one they now find themselves in. So in that sense they’re not at a disadvantage, just disoriented.

While they understand they are aboard a starship — since they knew their intended mission — they possess no knowledge of the ship or its systems. And shipboard computers and robots regard them as aberrant animal species.

One thousand Betas were aboard the ship at launch, 100 each of 10 different models. Some of their number have died in-tube from various system failures over the years. But others have already awakened in the time before the campaign starts. Many of the latter will also have died in the intervening years, but a few will be alive still, possibly ensconced in dwellings, labs or shelters.

It is only a matter of time before the Wolfoids or Androids get wind of them and seek out the location of their tube farm. But they are insulated to a degree from the danger posed by either of those factions. Androids cannot compromise Beta teams; and some Wolf Betas have already infiltrated Wolfoid packs.

If Beta is allowed as a standard character type — like Pure Human, Mutant, Mutated Animal, Clone, Robot or Cyborg — at start of play, only one may be in the group at a time. Roll a d% to find out which numbered team the Beta was from. How this lone Beta came to be with the rest of the adventurers is left to the player and the SM.

If this alternate Beta Protocol campaign start is used, each player is a Beta character. But no more than one of any given animal type can be in the group, as each team comprised one of each model. Roll a d% to find out which Beta team the group forms. If fewer than 10 characters are in the group roll the following for each absent team member: there is a 10% chance they died in-tube; if not, then there is a 10% chance they already woke up, wandered off and didn’t return; if not, then they are still frozen in good(?) health.

Whether or not each Beta’s kit locker opens when they wake is left to the discretion of the SM. Either way, it will contain only a couple of changes of body-appropriate field uniform, like-designed footwear, dog (heh) tags, a load-bearing vest and a knife.

Betas have the same five ability scores as mutants and mutated animals; they lack Leadership Potential.

The combination of their animal natures and lack of a Leadership Potential score means Betas are unable to wake their still-frozen teammates. The ship’s Main Computer understands the still-frozen Betas to be potentially dangerous livestock in cold storage; it simply will not entertain player character requests or commands to wake other Betas no matter what colour bands the PCs possess.

All Betas are sterile unless altered by mutation. They were designed to be infertile.

All Betas have Heightened senses as detailed below.

The 10 models of Beta and their characteristics are listed here. Pick or roll a d10:

8    Raccoon: Heightened Taste, +1 DEX and can see in near-total darkness

Note again that Beta species characteristics listed above are not actual mutations, they just grant the relevant advantages.

Unfortunately, lacking the generations of genetic adaptation demanded of life aboard the stricken ship — having been frozen in tubes — each Beta has one mutational defect (50/50 physical/mental) at start of play. In addition, all Betas have a penalty of -1 to Radiation Resistance.

All Betas can read and write the language of the ship’s signs, controls, plans and manuals. They also possess a combination of “Knowledge of technological items in general”* and “Working with simple technological devices.”* How this plays in-game is up to the SM.

*: Both from “The Total Person in Metamorphosis Alpha” (from Dragon #14).

Finally, each Beta is one class from X-plorers, a Scientist, a Soldier, a Scout or a Technician. Pick or roll a d10:

Seriously, go get yourself a copy of X-plorers. It’s so good! All the rules for the skills mentioned above are on the bottom half of page 6 and in the Class descriptions on pages 7 and 8. Short, sweet and simple. I’ll add it’s worth the few bucks to buy the art version; the Mullen and Zieser illos are pretty boss.

And I’ve always liked Justifiers for its Alien Legion vibe.

[Edit: If you’re thinking of a Beta Protocol team, you might want to watch the Genesis II trilogy and read through The Morrow Project. Wake to a world gone weird!] 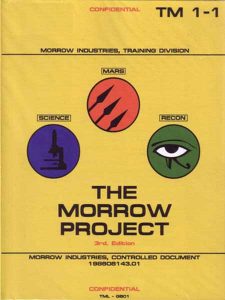 My favourite Wizard from Thundarr the Barbarian is, bar none, Mindok the Mind Menace from the ep of the same name. Watch it now:

OK so I’ve wanted a fig of Mindok for a good long while. I despaired of ever having one but then I discovered this guy: 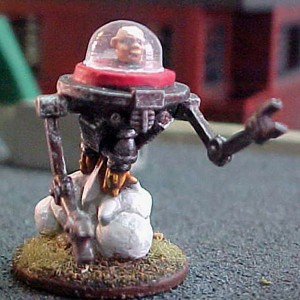 It’s a SuperFigs mini called The Head. (It also comes with a Hitler head, obviously.)

That gave me the perfect — well, good enough for Rock and Roll anyway — body.

I then searched around for the helmet and found this Reaper fig: 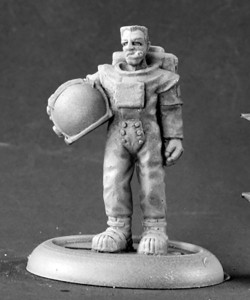 It’s their Chronoscope astronaut, Duke Jones. (I’ll also repurpose his head, for one of my Smokers.)

Both pieces involved some pretty serious cutting and filing and, on the helmet, some filling and building. He’s not perfect but I’m happy with how he turned out. He’s going to be a great villain for Mutant Future Thundarr (scroll down a bit; the download link is on the right hand side).