Today is November 5th. It’s Tom Moldvay‘s birthday. He’d have turned 70. Sadly we lost him when he was only 58. 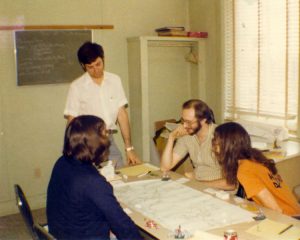 That’s him there, seated in the middle. [I was directed to this pic by my friend James Maliszewski (of Grognardia, Dwimmermount and The Excellent Travelling Volume).]

I’m celebrating mister Moldvay’s birthday today by adding a pair to his roster of Giants In The Earth.

“In the name of the Council of the Treaty for the Safety of the World, …”

… I give you Garth Nix’s Sir Hereward and Mister Fitz: 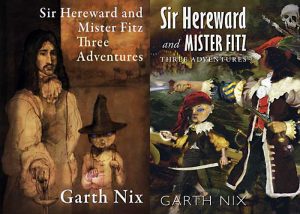 [I’ve bought or borrowed — libraries, man, they’re the best — all eight (to date) of the Hereward & Fitz stories. I hope you like what I’ve done with them.]

This duo is best suited to — and I’ve statted them for — Lamentations of the Flame Princess. The foes they fight, and the weapons they wield, are a perfect fit with Lamentations. But be advised my intention here is to reveal as little as possible about their shenanigans. Read the stories; they’re fun.

Wonder & Wickedness really is the way to go with Mister Fitz. Marrying the idea of sigils to that of sorcerous needles is a pretty simple thing and it delivers in a big way. After all, while this sorcerous puppet isn’t quite “a nuclear weapon that grants wishes,” it does come pretty close.

And speaking of the foes they fight, you really do owe it to yourself to get a copy of Petty Gods. It contains a campaign’s-worth of godlets and godlings; never again will you cast about, in need of a “listed entity under the Treaty” for your heroes to bind, break and banish.

Oh, and if you’re in the mood for urban adventure, I recommend you explore the City of Dolmvay. I like to place it near Dwimmermount. (I’m a bit of an autist when it comes to alliteration.)

[P.S.: I was going to write up Gardner Fox’s Niall of the Far Travels, to address the et al. in his Appendix N listing. That didn’t go as well as I’d like so he’ll have to wait. Maybe til next year?]