I’d like to see the interwebs celebrate the life of Tom Moldvay for his birthday upcoming on Monday, 5 November 2018.

Let’s raise up a host of heroic Giants in the Earth!

Tom Moldvay’s (and Lawrence Schick’s) Giants in the Earth is one of my favourite article series from the early days of Dragon magazine.

Dragon 30 printed this (excerpt from a) letter in “Out on a Limb” (top) and this comment by Gary Gygax in “From the Sorcerer’s Scroll” (bottom): 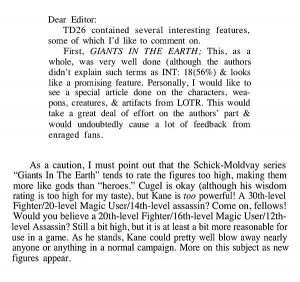 Below is the reply Schick and Moldvay wrote – in Dragon 37 – about their process for writing up heroes for Giants in the Earth: 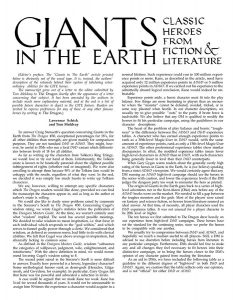 Here is their hero level guide from that article. I cleaned it up, filled it in and added DCC. Experience point- and level-wise most of the OSR simulacra fall somewhere between the O- and AD&D values. I built my hero (see below) using Lamentations of the Flame Princess, which hews pretty close to the AD&D numbers. Lion & Dragon is more like DCC. You get the idea:

And here’s the list of characters they knocked together as possible future contenders. I’ve struck through the characters that were covered in later articles. Still leaves a bunch. And it looks like only six of the remainder are denizens of Appendix N:

As a matter of fact, only a few of the Giants hailed from Appendix N sources. The majority are from other stories and myths, books I like to call Appendix Non. I’d like to see more Ns appear so I’m going to stat up Niall of the Far Travels to fill the “Fox, Gardner. … et al” slot. I’ll be posting him on Mr. Moldvay’s birthday. In case you want to add another N to the list: 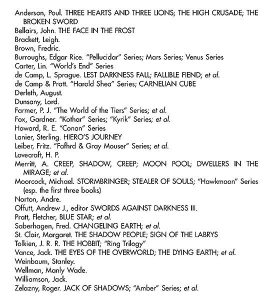 After Dragon 42 Roger Moore wrote more and more of the Giants. And the series stopped running altogether after Dragon 64. Then in Dragon 70 (pg 14) Moore wrote the article “Giants can be Awful or Awe-ful.” It presents some thoughts on what to do with these heroes in your campaign. It also includes a list of all the Giants that were published plus some other Giants-like articles that followed. Moore’s piece is the last word on Giants in the Earth.

Other than – and after they wrapped – Giants in the Earth, Dragon made two more attempts at something similar. Larger Than Life was a column that appeared only twice and Lords & Legends took all of three kicks at the can.

I also compiled a list of all the heroes in the original version of Deities & Demigods. Hero Fight, GO!

If you do post a Giant (and ping me) I’ll copy/paste it into a group pdf and put it on the site, probably a week or two after the 5th; that’ll give me time to gather them all.

In the meantime, here’s a hero from Appendix Non, by way of Lamentations:

Oh, and if I haven’t already mentioned it, The Dragondex is an absolutely amazing resource. Go, seek, find, enjoy.

[Edit: There have been comments (both recently and over the years) about the high levels of Giants in the Earth characters. Schick and Moldvay do address that in their article in Dragon 37; indeed, comments like those are why they included the level breakdown chart above.

To help illustrate that things did in fact temper over the course of issues, below is the list of heroes and their levels Roger Moore included in his piece from Dragon 70. There is a general trend of levels dropping out of the 20s into the teens (and even single-digits) as time goes on.

I think 10 to 15 levels is a reasonable range for heroes with a number of trials and ordeals under their belts. After all, they are supposed to be outstanding.]