They now (well, a year and change from now they will) make four groups each of five bipedal dinosaur-men. Witness the majesty: 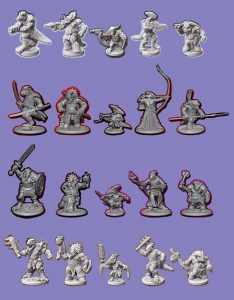 The top and bottom groups are from Bones 4. The middle two are from the latest funding frenzy.

These figs can — of course — be played horizontally from the above image, as a group appropriate to whatever era you’re murderhobo-ing around in. But what’s also cool is that you could play them vertically, as a kind of Temporal Fugue (or maybe more like a Dimensional-, Multiversal- or Planar Fugue) character per Metamorphosis Alpha:

“Temporal Fugue: A mutant’s ability to make perfect replicas of himself by shunting back and forth in the time stream (never staying). The mutant is able to make 1-10 doubles of himself per week that will last 5 full turns or until death. For each double killed in battle the mutant must rest after the battle for 1 week. All doubles appear together but each will fight as an individual with no real coordinated attack plan. It is up to the referee to decide how many can be produced in a day’s time without exceeding the limitation. Example: It could take 10 seconds to produce one copy, but the player would not be able to produce another copy for 18 hours thereafter. The referee can check for each game week to determine how many copies can be produced in that period, basing it on a 1 to 10.”

The character can (again, per MetAl) generate copies of himself from across the Meta-/Quantum-/Blah-blah-verse. So for example (to date), Blacktooth Suppressor Rex will be able to produce three additional versions of himself (Blacktooth Samurai Rex, Blacktooth Paladin Rex and Blacktooth Savage Rex) to fight in the game for, say, dx turns each.

Another way they can be played vertically is as a Timeslide (or again, Dimensionslide, etc.) character. Blacktooth Suppressor Rex doesn’t bring Blacktooth Samurai Rex to himself as a separate version (i.e., another model on the table). Instead the two shunt around, the former becoming the latter, and you swap out the figures. This could come in handy when Rex needs two katanas instead of a blaster.

You can drive home the idea all the models of each dino are multiversally the same being by painting all their skin, eyes, teeth and claws the same. Likewise their clothing and armour can be done in a common theme, red for Blacktooth, blue for Thunderfoot, orange for Skywing, purple for Bloodcrest, etc. (Totally don’t think of 80s/90s TMNT when you do this.) [Oh OK here’s the fifth: Armorback. Colour TBD.]

Now if anybody at Reaper sees this, I’d really like — between the top two rows — a Pirate or Pulp or Steampunk dino group (heavy on the Pirate). Right in the middle there I want Renaissance types with floppy hats and puffy pants, like Conquistadors (morion helmets) or Landsknechts (those shirts). And between the bottom two rows, Arabian Nights or maybe Ancient Egyptians?

Ideally I’ll end up with seven settings represented. ‘Cause then I can roll a d6 for era when playing them Timeslide-style.

All in all, well played Reaper!