Interloper’s two packs of Chickens — Robot-Hunters and Cocked Rifles — give you six foul fowl with which you can terrorize everything from meat packing plants to mutated garden plants with equal vigour.

And playing them in MDRG as a fixed race or species — instead of as an assortment of randomized mutated animals — gives you another option besides the Purity Squad, Android Party or V1L3 Wretched: the Cyclopic Brood.

This is the base for each figure in the Brood:

Cyclops (-3) : Ranged attacks suffer a -1 penalty per range band (i.e., the first range stick is at -1, the second is at -2 and the third is at -3). No shooting beyond three range bands is allowed under any circumstances.

Each Cyclopic Chicken then gets the following:

Following the above method, I arrived at these two groups: 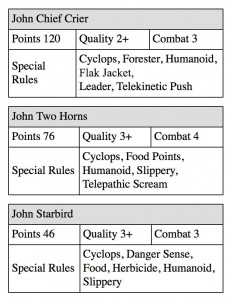 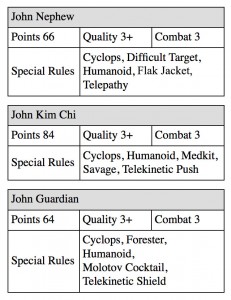 Benching (Cooping?) John Nephew or John Guardian brings them under 400 points with five models in your initial Brood.