A while ago I had the idea that there are now enough book-, blog-, pdf- and zine-published lists of spells for The Game that it’s easy to think of each as its own School of Magic separate and distinct.

And now that Lamentations has published both Vaginas Are Magic and Eldritch Cock — with their stated and contemplated rule changes for Magic-Users — it seems like the right time to put ink to paper.

Each Wizard is a student of a particular magic school. When a player creates a Wizard character he rolls (currently a d10) on the following — ever expanding — table to determine which School of Magic was his alma mater:

By way of giving the player some control over his character’s life, the Wizard may choose either the School above or below the one he rolled if he doesn’t like the original result. For these purposes the last entry is above the first, and the first entry is below the last. You get the idea.

Once you know the School, determine the Wizard’s three beginning spells from the tables below and off you go.

The table includes every spell from the Magic-User list in Rules & Magic.

Though spell levels don’t exist anymore, they’ve been included in the tables to make them rollable sections (using a d9 in this case) should a DM want that option for any reason. And within each level the spells are numbered by die-type, again for rollability. 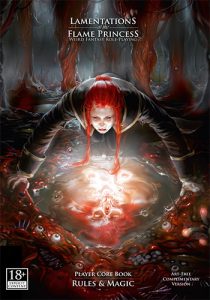 A friend gave me a pdf of this mighty tome a few years ago; it’s how I learned about it in the first place.

The Necromican is why I started listing page numbers for spells in these tables. It was published in ’79 and that decade had a pretty general “Fuck alphabetical order!” attitude which I appreciate in spirit but which makes finding the text you need right now during play a bit, hmm, I’ll say, shitty. 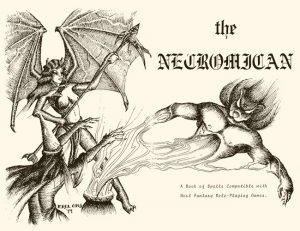 Since Eldritch Weirdness is directly connected to Lamentations through the spells Force of Forbidment and Strange Waters I & II it’s an obvious addition here as it’s own School. It only contains 30 spells, but at one-spell-per-level (per Vaginas are Magic) and campaigns tending to be low-to-mid level anyway (see Playtest Notes in Eldritch Cock), all is well. 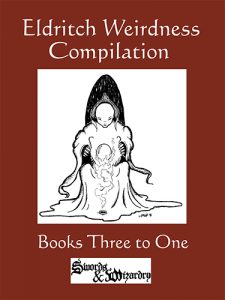 If you thought page numbers were helpful with The Necromican wait til you get a load of the list of spells for the Illusionist from the Original PHB! In some cases the spell descriptions are Illusionist specifics referring to Magic-User particulars referring to Cleric generalities. For reals. 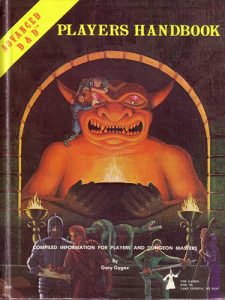 I’ll follow up with Magic Vaj, Eldritch Cock, Space-Age Sorcery (one of my favourites of all time) and Ancient Vaults & Eldritch Secrets in a bit.

Oh, and Wonder & Wickedness will make you a Sorcerer instead of a Wizard. It’s boss! Get it.

[A note about bizarre dice: I’m a big believer in Purpler Sorcerer Games‘ Crawler’s Companion ! Select dice on the bottom then batch at the top; in the script roll field enter whatever value you want (e.g., 156 for the Libro Lamentati); hit the Roll button; Boccob’s your uncle!]