I was recently at the National Gallery in London and saw these two paintings of Saint George and the Dragon. Unfortunately I didn’t record when or by whom they were done. But check it out, they can be arranged in sequence.

ACT I, The Charge: 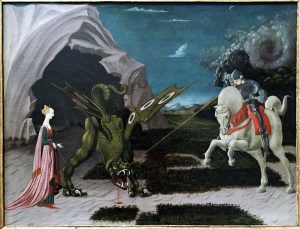 ACT II, Lance In, Sword Out: 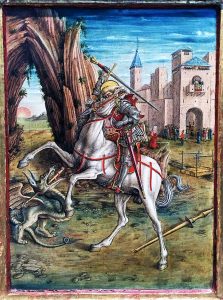 In addition to depicting two distinct phases of the battle they also show George gaining divine favour during the engagement. In ACT I he has no halo; in ACT II there it is.

This got me thinking about being — or rather, becoming — a Paladin.

Here’s a thought: instead of a player starting a campaign as already a Paladin, have him start as a Fighter and make his achieving Paladin-hood be an in-game/through-play goal or event.

It could be done purely mechanically with, say, an XP threshold (though that strikes me as boring) or PHB Bard-style, by making the man-who-would-be-Paladin spend x Levels as a (Lawful Good?) Fighter before being able to switch up.

Or it could be done through role-play over something as short as an in-game quest or as long as a campaign-spanning arc. This would allow for road-to-Damascus changes of heart (read: alignment), conversion and blessing.

I like these ideas because whether or not one is a Paladin is not entirely up to oneself. No amount of hard work or good deeds will get you the badge. The higher powers are the only ones who get to make that call. And they don’t make it very often.

[On a not entirely unrelated note, have a classic White Dwarf (ish 20) article:] 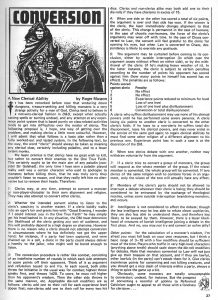